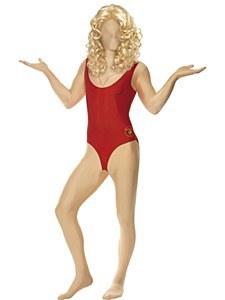 Baywatch Second Skin Suit Contains:
- A flesh colour lycra bodysuit that hugs the skin and has an attached screen printed swimsuit which has the Baywatch logo on the bottom. The jumpsuit cover's the entire body from head to toe. There is a concealed under chin opening. Our second skin Baywatch Costume is a funny yet sexy full body suit choice that is sure to demand attention wherever you go.

Second Skins Party Costumes are typically used for going out and having fun around the town with friends or just about anywhere else, but with the fact that unless your hood is down no one knows your identity. When it comes to Halloween Costumes and 80s Costumes look no further then Partyworld.ie. Partyworld has a fantastic array of costumes, whether it be Baywatch Costumes, Superhero Costumes or Kids Costumes we have got you covered both online and in our Costume Shop.