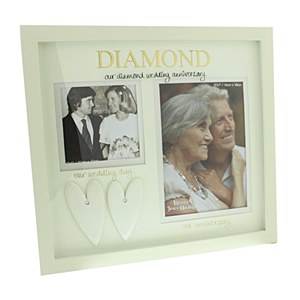 The Diamond Anniversary Frame features a lovely resin frame that will be an ideal show piece for that special photo on one's 60th anniversary. The frame will be sure to bring the room alight.


The 60th anniversary frame is constructed from a resin material with raised lettering which includes the wording "Diamond Anniversary"The love frame is suitable for one 6" x 4" Photo. There is a stand to the rar so that the frame can sit flat on any surface.