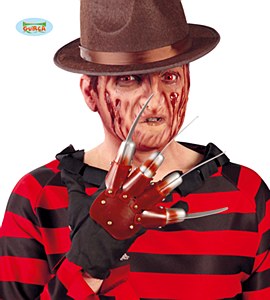 Bring the nightmare back to life with a Freddy Krueger Mask and costume this Halloween. The ghastly image of Freddy Krueger's scarred and charred face is one that has haunted the dreams of an entire generation. If you are planning on paying homage to the cheeky horror villian, then our Freddy Kruger Mask will bring those old nightmares you've been fighting hard to forget.