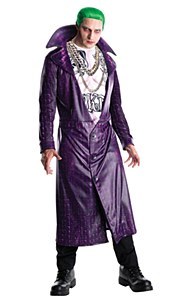 With his flamboyant coat open enough to reveal his unusual body art, few will dare look The Joker in the eye. This latest, Suicide Squad Joker Costume incarnation of Batman’s arch-nemesis has his own dark agenda.Transform into a psychopathic supervillain and member of the Suicide Squad with our all new Joker Costume.
Suicide Squad Joker Costume Contains:
- A purple jacket with an attached shirt front that fits easily with velcro in the back and even has all of the stylized tattoos that the Joker has in the movie. The jacket portion of the costume has a faux snakeskin print on the front, along with printed buttons and an exaggerated collar.
Size Available:
Extra Large - Chest Size 44 to 46".
Standard - Chest Size 42 to 44".
The Suicide Squad is a team made up of supervillains who carry out dangerous black-ops missions for the government, in exchange for commuted sentences. Their specific motivations vary, though, and even the “supervillain” part isn’t a hard-and-fast rule. Some of them are more like antiheroes, and at least one of them is typically a superhero in the comics.