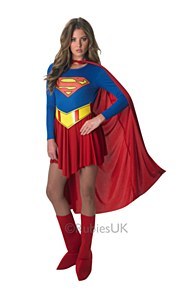 Supergirl Costume Contains:
- A Supergirl one piece mini dress which consists of a long sleeved leotard blue top which has an attached red cape that matches the loosely pleated red shirt. The top naturally includes the Supergirl emblem in red and yellow.
- A Supergirl shiny yellow belt that secures around the waist with Velcro.
- A pair of Supergirl red boot top covers.