From the world of Pixar's Cars comes Disney's Planes an action packed 3D animated comedy adventure featuring Dusty. The Disney Planes party range features Cups that come with a colourful picture of Dusty and Ripslinge against a blue background. The Flag Banner features colourful pictures of some of your favourite characters such as Dusty, El Chupacabra, Skipper and Ripslinge. The Disney Planes Pinata will add lots of fun and entertainment to the party.

4 products in this category, displaying products 1 to 4. 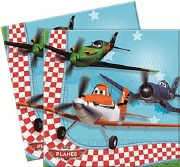