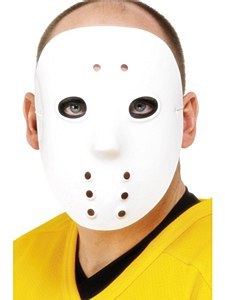 Hockey Mask.
Become one of the most feared knife wielding impaler of teenagers and the star of Friday the 13th when you put on this Hockey Mask. Our Hockey Mask features a white PVC Hockey Mask which has an attached elasticated band to hold the mask in place.

Jason Voorhees, the son of Pamel Voorhees was born deformed. He lived with his mother at Camp Crystal Lake in the city of Crystal Lake. Jason was bullied incessantly until 1957, he tried to prove to the bullies that he could swim and drowned in Crystal Lake.

One year later two of the Camp Crystal Lake counselors were murdered and the camp was shut down. Future attempts to reopen the camp were plagued with problems, including poisoned water and unexplained fires.

In 1980 eight new counselors planned to reopen the camp, but ultimately all but one of the counselors were murdered. The killer is ultimately revealed to be Pamela Voorhees. Pamela is then beheaded by the only survivor Alice.