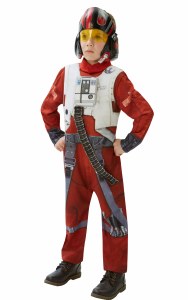 Battle stations! Dive into your Poe X-Wing fighter Costume with its padded chest piece and realistic 3-D detail! As crack pilot Poe Dameron, call sign "Black Leader", the enemy craft of the First Order will have to hit their marks to avoid disaster.
Deluxe X-Wing Fighter Costume Contains:
- A printed padded jumpsuit which has an attached 3D panel.
- A X-Wing Fighter half plastic mask.
Size Available:
Teenager - Age 13 to 14 Years Old.
Large - Age 11 to 12 Years Old.
Medium - Age 9 to 10 Years Old.
Poe Dameron was a member of the Resistance approximately thirty years after the Battle of Endor,and he became a leader in the group's fight against the First Order.
In that capacity, he commanded a squad of T-70 X-wing fighters, flying under the callsign of Black Leader.He also flew with the spherical astromech droid BB-8. Poe Dameron was a human male. He had brown hair, brown eyes, and fair skin. Dameron was known for his strong commitment to the Resistance and his duty, but had trouble with the line between that commitment and the commitment to his comrades.