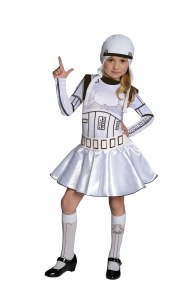 Battle the rebels and defend against the Jedi when you wear the Storm Trooper Girls Costume. Once more the dark side of the Force is at work and helping the cause are the elite Stormtroopers in their white armour. Who’ll dare stand in your way?
Stormtrooper Girls Costume Contains:
- This Stormtrooper costume for girls comes with a white polyester dress that stretches to fit. The dress has printed armor on the front. The skirt has an attached petticoat underneath.
- The belt is made of a white faux leather material and has a Velcro fastener in back.
- A pair of white socks with printed armor graphics on the front are also included.
- A white hood is a laplander style hat with tassels on each side.
Size Available:
Large - Age 8 to 10 Years Old.
Medium - Age 5 to 7 Years Old.
Become one of the Imperial Stormtroopers in one of these officially licensed Star Wars Costumes. Stormtroopers are elite shock troops fanatically loyal to the Empire and impossible to sway from the Imperial cause.They wear imposing white armor, which offers a wide range of survival equipment and temperature controls to allow the soldiers to survive in almost any environment. Stormtroopers wield blaster rifles and pistols with great skill, and attack in hordes to overwhelm their enemies. 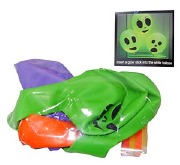