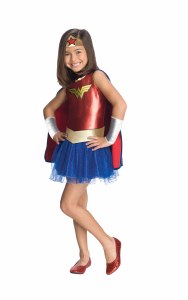 Wonder Woman is considered as one of the ultimate female superheros. She is part of the Amazon tribe and is the founding member of the Justice League. Wonder Woman comes armed with the Lasso Of Truth, a rope that while within its embrace compels you to tell the truth. Deliver punishment to the festering evil of the universe in this fantastic Wonder Woman Tutu Costume.

Wonder Woman Tutu Costume Contains:
- A Wonder Woman royal blue and red dress. The bodice of the dress is a red metallic effect sleeveless top which features the Wonder Woman logo in the center. The neck and armholes have a gold metallic trim. The skirt of the dress is a royal blue tutu which has an underlay of blur satin like material with an outer layers of glittery blue tulle.
- A red satin like cape which fastens at the neck.
- A pair of silver gauntlets.
- A metallic gold headpiece which has a red star in the center. 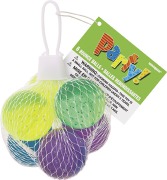 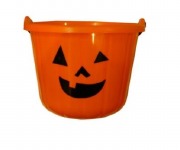